In early February, the United States hit the grim anniversary of one year since the first death from COVID-19. Since then, our lives have changed in a way that hasn’t been experienced since the influenza pandemic of 1918. It’s shocking to look back and realize that it has been nearly one year since I last saw my classmates at LSU. It feels like it was only weeks ago that we attended the Field Fair and left having no idea when we would next see each other. At the same time, it feels like it has been forever since I was last able to comfortably be around a crowd of people, or walk by someone without worrying in the back of my head that they might be carrying the virus, or cough without immediately thinking about how I may have been exposed. One writer even dubbed this past year as a “time warp,” and I can’t think of a better way to describe this feeling. What it is, is a reaction to trauma.

Although trauma may not be the first word that comes to mind when thinking about our time spent shut indoors binging Netflix and gaining twenty pounds, trauma doesn’t always come from things like abuse or natural disasters. Trauma can come from unexpected sources and have unexpected symptoms. And although I joke about binging Netflix, I don’t mean to make light of our collective experiences at all. Even for those of us not on the front lines, COVID has taken away much of what used to get us through the drudges of everyday life. Furthermore, at this stage of the pandemic, it’s hard to find anyone who hasn’t lost somebody to the virus. In fact, an estimated 5 million people are in bereavement. Other experiences, like having to navigate virtual school or the blurring of work-life boundaries, can also be traumatic. It’s also important to remember that what may not be traumatic to one person may very well be traumatic to someone else.

Read on for more about Dr. Tellis' historic career in medicine. 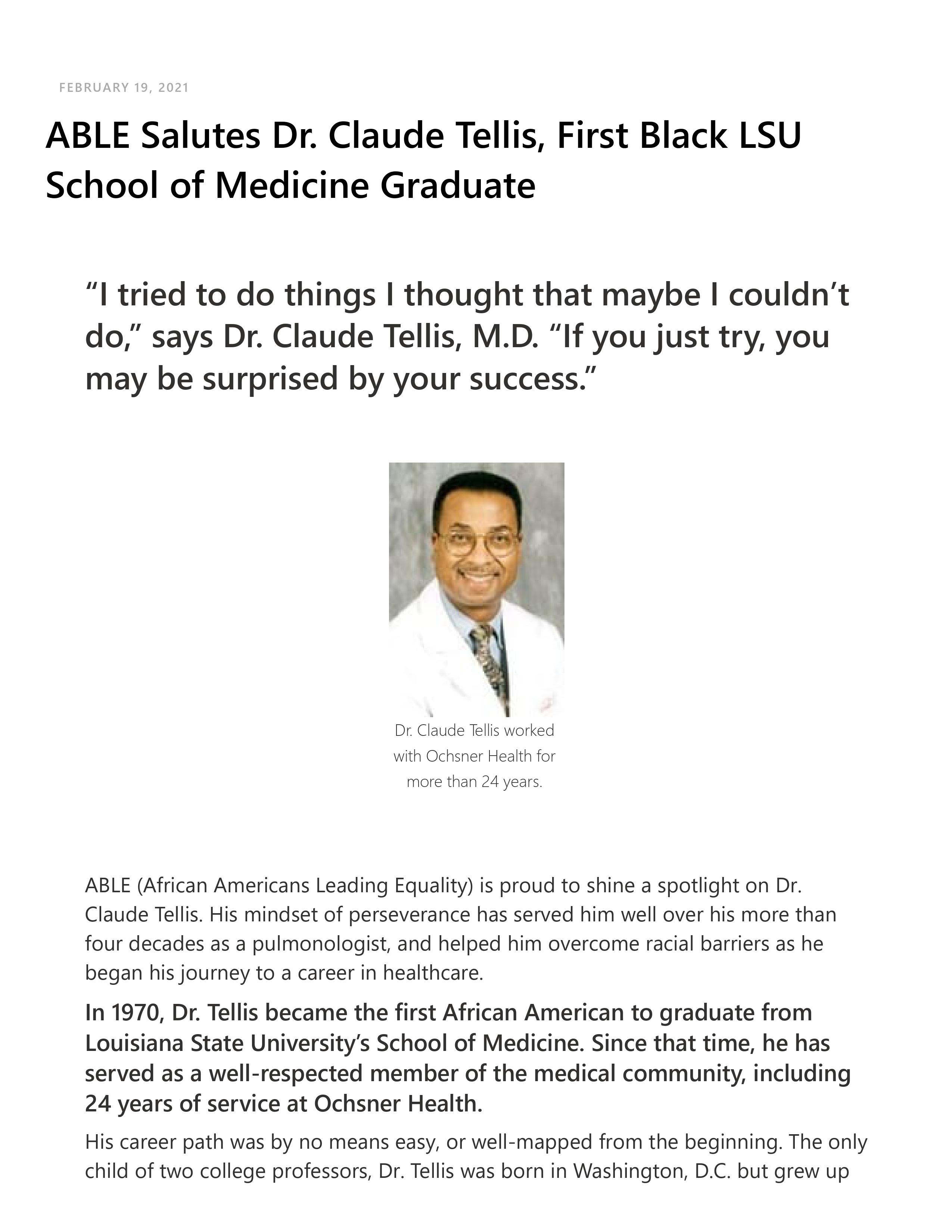 Insurrection at the Capitol 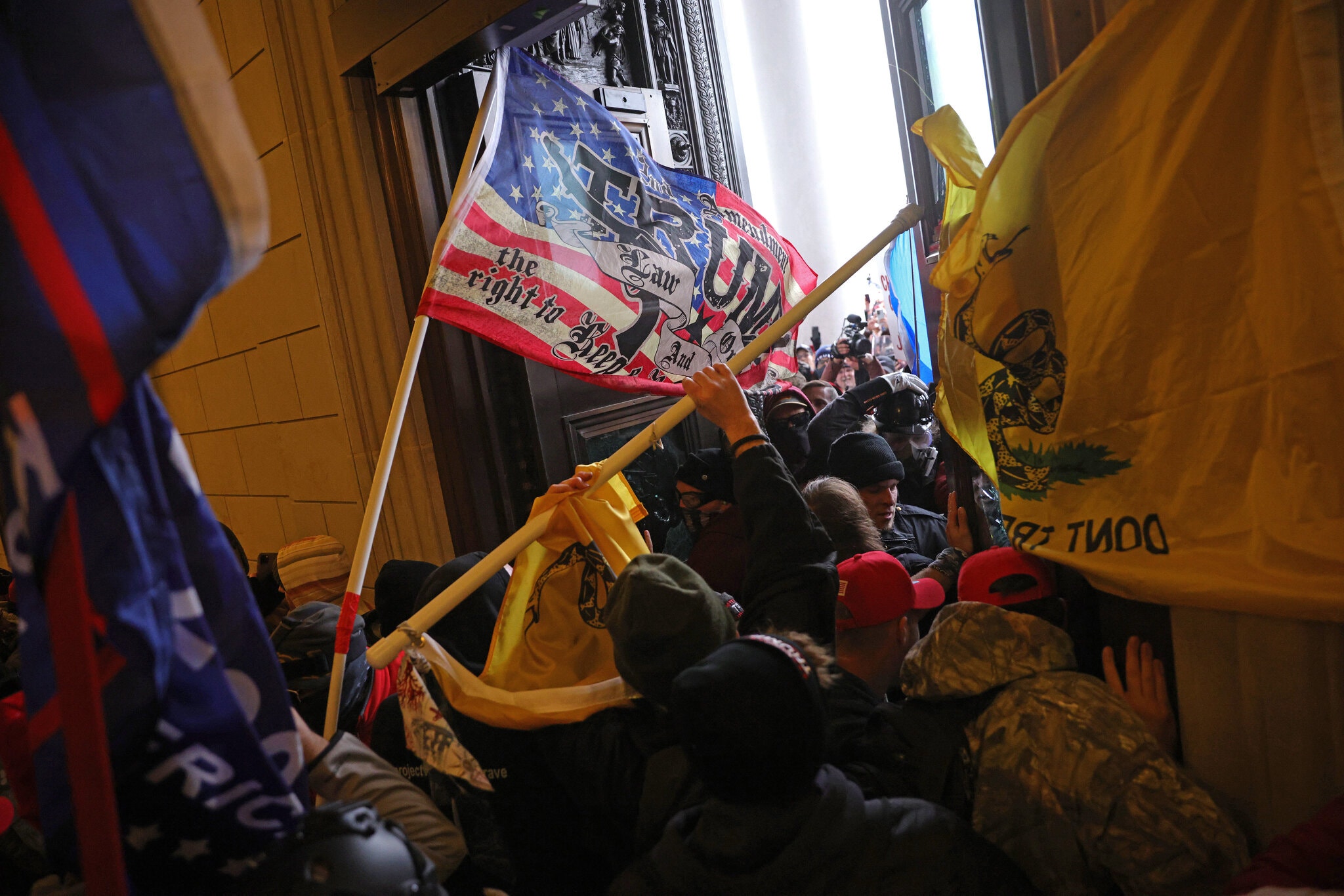 Today, I want to talk about something that has been on the minds of every American since January 6th.  Like many others, I found myself looking on in shock and horror as the Capitol was defaced and our democracy faced its toughest test likely since the Civil War. I even found myself tearing up in anger and frustration, especially as I began thinking about how so many protesters suffered grievous injuries while fighting for racial justice last summer. In contrast, these extremists seemed to go by unharmed, although thankfully it appears that most of those who participated in the violence will eventually be caught and charged.

You may ask, what does Together Baton Rouge have to do with this? It’s true that we generally focus on local issues, and as many within the organization will tell you, those issues have much more of an impact on your everyday life than national politics do. However, I believe what we saw that day was the symptom of much deeper problems that exist within all of our communities. Despite the desire to blame these problems on any one person or group, we must remember that we are all responsible for strengthening the weaknesses in our democratic institutions, weaknesses which were made glaringly apparent by the events of January 6th. I think it is not only possible but absolutely necessary to condemn the actions of the individuals who threatened our democracy that day while also acknowledging the factors that could have led to such violence. The attack on the Capitol also holds particular significance to Louisiana and Baton Rouge, as reports indicate that local business owners were present at the insurrection, while many of our elected officials voted against the certification of the election results – even after their lives were threatened that day.

In John Dewey’s, “How We Think”, the author takes after John Locke in critiquing a series of errors that Locke believed we are all prone to making when formulating our thoughts and beliefs. One common error in thinking which I found particularly poignant describes people who “sincerely and readily follow reason” but “converse with but one sort of men, read but one sort of book and… will not come in hearing but one sort of notion.” Nowhere is this error more evident than in our current political climate. Despite significant progress in terms of racial equality, Black and White Americans remain largely segregated, whether in schools, workplaces, neighborhoods, or even the churches they attend. Those who grow up in urban environments rarely, if ever, interact with those from more rural areas. As someone who grew up in an urban environment, I couldn’t even imagine what life would be like in a rural area. In fact, I even fear driving through them at times. Another significant divide exists in the realm of education. Pursuing a higher education frequently divides you from those that don’t, even if this separation isn't necessarily intentional on your part. After all, we primarily make friends through our educational institutions. In this, I also share some guilt. All of my closest friends have had at least some college education, and many are pursuing graduate degrees. Age as well is a huge divide, to the point that I can have a hard time even holding a conversation with an older person – much less find any means by which we might closely relate to one another.

Statement On January 6 Violence at the US Capitol

"As a network of religious, labor, education and community leaders from all walks of life and all political persuasions, we condemn the acts of insurrection and violence in Washington, D.C."

We the leaders of Together Baton Rouge are shocked and appalled by what happened at the Capitol Wednesday, January 6.  The Capitol was disrespected and demeaned by violent actors who threatened the rights of every citizen who peaceably engages in the democratic process in our country.

Deliberation, debate, argument, compromise, deal-making:  these are the means to advance interests in a democracy.  Working with our sister organizations of the West/Southwest IAF, we teach and practice these political skills every day; fighting in a non-violent manner on behalf of the issues that impact families and traveling regularly to state Capitols, City Halls and decision-making chambers to advance these issues. That the buildings and halls of power belong to these organized citizens is made self-evident by their consistent and persistent presence throughout years of effort.  Their work is carried out through hundreds of conversations full of respectful dissent, concession, and, sometimes, victory. In other words, democratically.

What happened at the U.S. Capitol not only endangered the officials, staff members and public safety officers who were present, but endangered our democratic institutions by introducing violence to what has, until now, been a tradition of peaceful transfer of power in national leadership.  To arrive at the point of raising arms is the weakest form of power in our national leadership and our nation was weakened on January 6 by the use of violence in a place of political debate. We mourn the unnecessary loss of life that occurred as a result of this attack.

As a network of religious, labor, education and community leaders from all walks of life and all political persuasions, we condemn these acts of insurrection and violence in Washington, D.C., and recall the words of Abraham Lincoln in his second inaugural address at the conclusion of the Civil War:  “With malice toward none; with charity for all; with firmness in the right, as God gives us to see the right, let us strive on to finish the work we are in; to bind up the nation’s wounds; to care for him who shall have borne the battle, and for his widow, and his orphan--to do all which may achieve and cherish a just, and lasting peace, among ourselves, and with all nations.”