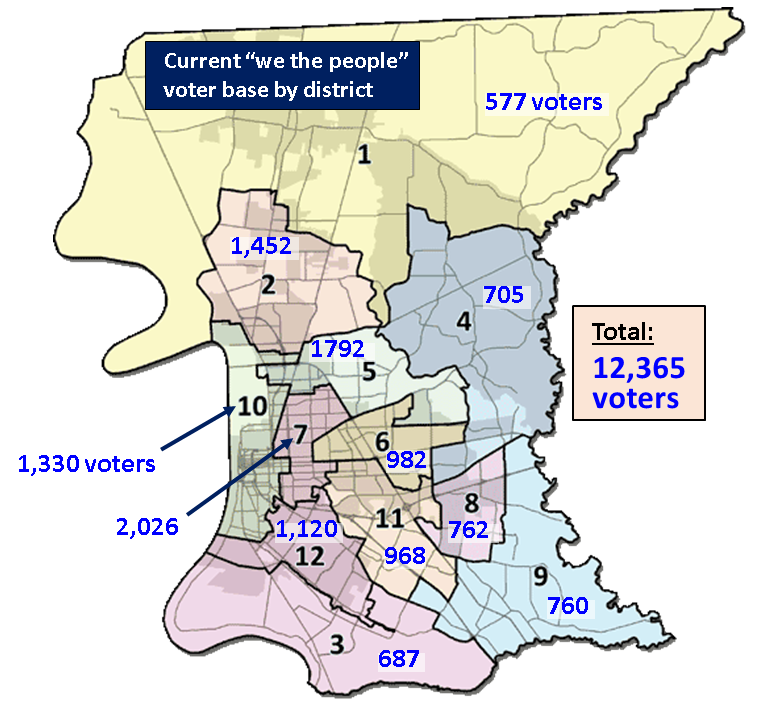 “Dr. Franklin, what kind of Government shall we have?”

We the People is a strategy of, by and for citizens

• to strengthen citizen leadership at the local level,
• to take action on issues affecting our communities and
• to create a powerful force against factionalism in government.

To disrupt the political culture of division across racial and partisan lines, by assuring that the most well-organized group of people in every local electoral district is a diverse constituency of citizens who think with regard to both their local interests and the broader community and who organize their elected representatives to do likewise.

To develop relationships among fellow citizens in local districts, to form a constituency capable of reflecting on our interests, negotiating around our differences and taking action together for what we come to define as the common good.

#3) Put citizens at the center of public decision-making

To put citizens at the center of public decision-making, by shifting from a model of citizens as passive observers in the political process to making citizens primary participants in our local democracy. That means organizing fellow citizens, researching issues, proposing alternatives and organizing our elected officials around those proposals (instead of the other way around).

The starting point for the leadership and citizen constituency of “We the people” will be the base of more than 12,000 voters who have been active with TBR in every zip code.

or
Please check your e-mail for a link to activate your account.